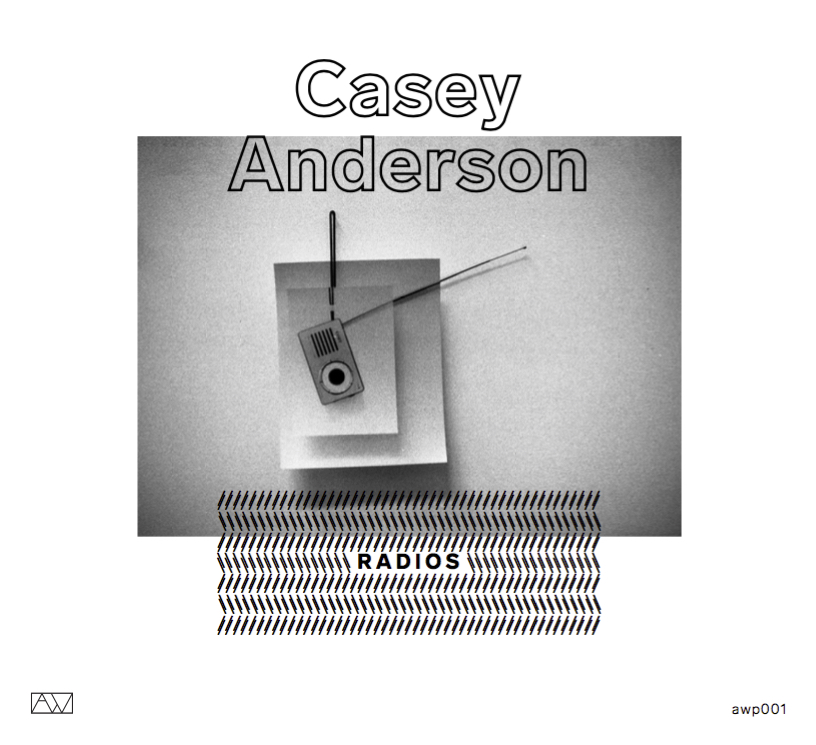 All Music by Casey Anderson, copyright 2016 a wave press

In 2012 the Museum of Contemporary Art, Los Angeles’ department of Education, arranged via Madison Brookshire, donated 60 portable AM/FM radios to me. Originally purchased for a Michael Pisaro performance, they sat unused in MOCA’s basement amongst other leftover materials for years until I discovered them while preparing for a series of events. When I got them they were surrounded by a tangle of earbuds that resembled a nest. They are all the exact same make and model and strike me as a family.

Shortly before this donation I wrote my first piece explicitly for radios, possible dust. In possible dust one radio is mistuned between noise and some broadcast and, over the course of the performance, each performer attempts to locate that “tuning” on a radio by ear. Sometimes this happens immediately (at which point the piece is over), sometimes one performer hangs over after the rest of the ensemble has finished tuning, arriving at a kind of accidental solo. possible dust was the first of many pieces whose genesis came from having a large quantity of AM/FM radios on hand.

snow(2) came later. In snow(2) performers wield a battery of objects as a kind of listening apparatus/display mechanism: a resonator, a collection of arbitrarily selected tuning forks, a radio, and a piezo driver circuit. Each performer attempts to locate one of the pitches from their collection of tuning forks while scanning across the AM/FM bands. When a pitch is found, the player “replaces” the radio (acoustically amplified by the resonator and piezo driver circuit) with the tuning fork, allowing the fork to decay naturally into the object, at which point the procedure is repeated freely.

At one point my friend William Hutson suggested that we work on recording some of these radio pieces nicely (i.e. not simply room recordings from live shows), a prospect that I had given up on out of frustration. We scheduled a session, set up in my apartment in Echo Park, and recorded three versions of possible dust. Two of them are on this CD.

About once a year we would set up a session for snow(2) and mull over the results for six or seven months, eventually deciding to re-record at a later date. We repeated this sequence for three years. During our third session, up at CalArts, we finally found a balance between the extremely wide dynamic shifts that comprise the main activity of the piece.

Eventually the radios were moved from their original cardboard box, emblazened with the MOCA logo and worn from wear and tear, into a milk crate. Cued by some subtle vibration/settling of my apartment building, it is common for the radios to slightly shift their position against each other, resulting in a handful turning on (the weight of one radio on another is just enough to depress the AM or FM buttons, both of which double as “on” switches). Sometimes this happens at 3am and I wake up in a daze to a blast of static, talking, and music. Digging around in the box to locate, and then turn off, the sounding radios generally results in more of them turning on. I eventually realized that letting the settled/on radios run out of batteries was the best solution to this phenomena, a kind of gravity-driven performance. Following this, I have always imagined bringing the box full of radios to a show, walking on stage, letting them drop from an inch or so above the ground, and, knowing that at least a handful will likely turn on regardless of how I do this, proceeding to walk off stage.

I arrived at this short text formulation describing the phenomena (perhaps it is a score): box full of radios (settling, on).